Concussive Disorders are now extremely common and increasingly understood to be dangerous. Neurological diseases generally include conditions involving the Brain and Mind but also he Spinal Cord, the Muscles and the Nerves (all evaluated by Dr. Gross).

The most common types of dementia are Alzheimer’s disease and vascular dementia. They along with Hydrocephalus, Lewy Body and Frontal Lobe Dementia need Neurological evaluation. Currently, there is no cure for most dementias. However, there are some medicines can decrease dementia risk and symptoms. In addition to finding a cure for dementia, researchers are looking at ways to delay or prevent various dementias. For example, dementia could be delayed by changing lifestyle behaviors such as what we eat and how much exercise we do. As dementia mostly occurs after the age of 65, delaying dementia by as little as 2 years could reduce the number of affected people by up to 20%!

Dementia is normally caused by a number of factors including genetic and lifestyle factors. As a result, trials that target more than one cause of dementia are arguably more likely to delay or prevent dementia.

THE COGNITIVE EVALUATION- AVAILABLE IN THE USA AND WORLD-WIDE VIA COMPUTER TESTING
- DIRECTED BY DR. KENNETH B. V. GROSS

Whether you’re recovering from a neurological condition,or seeking optimal brain health and wellness, it all starts with an engaging and scientifically-validated cognitive assessment. 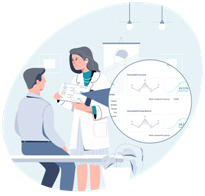 How does it work?

Using a tablet, desktop or laptop computer, you’ll take a series of quick, fun, and engaging tasks that have been scientifically validated to measure your memory, concentration, reasoning and verbal abilities—all core areas of cognition that are integral to your quality of life.

How will results be used?

Results for each task you complete will indicate where you stand relative to others in your age group. Over time, and as you advance through a treatment or wellness plan, you’ll begin to see performance trends so that you can objectively evaluate how you are progressing. Your healthcare professional will use this information during intake to ensure they target the right areas during treatment,  and then re- assess periodically to measure progress.

Email info@thegrossclinic.com to find out how you can start measuring your cognitive function today